The Clean Water Act (CWA), as passed in 1972, was the first major law in the United States to effectively address water pollution, largely by creating an enforceable pollution permitting regime, with accountability and oversight provided by the federal government and citizens. The CWA serves to “restore and maintain the chemical, physical, and biological integrity of the Nation’s water” and does so by requiring EPA and the states to work toward the attainment of states’ water quality standards and by fully eliminating sources of water pollution.[1]

Any facility that intends to discharge pollution from its operation must apply for and be covered by a permit. These permits include technology-based and water quality-based limitations among other requirements. If permit holders fail to comply with the permit requirements or discharge a pollutant without permit authorization, they are subject to potentially substantial enforcement actions and penalties.

Some facilities require individual permits with requirements that are based on site-specific considerations, while other facilities must follow the blanket terms set under a ‘General Permit,’ where one permit applies to an entire sector.

Under the CWA, the EPA may delegate authority to implement the permitting program to states, tribes, and territories, allowing them to perform permitting, administrative, and enforcement duties. In Maryland, MDE’s Water & Science Administration primarily retains this authority. 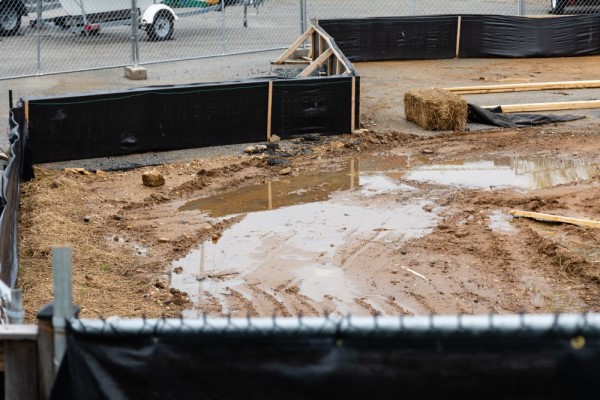 Ensuring that Facilities that Require a Permit, Have a Permit

There are some facilities or sites that require clean water permits but do not have one. The stated goal of the Clean Water Act was to eliminate discharges of pollutants into navigable waters by 1985. We’ve failed to reach this goal by a long shot due to a myriad of reasons, including, but not limited to, lagging environmental enforcement and pollution from unpermitted facilities.

In Maryland, according to CAP and partners’ assessments, there are still many facilities that are operating without appropriate permits or operating with outdated permits. For example, a Magothy River Association (MRA) query of MDE databases found that, of the 12 facilities in the watershed that appeared to be subject to the industrial stormwater general permit, six facilities were operating without coverage, five had expired permits, and one site had coverage, but had only recently obtained it. Based on the low rate at which these facilities were properly permitted, there are likely hundreds of other facilities operating across the state without the required permit coverage and discharging untreated pollution in our communities and to our local waterways without any consequence.

A review of data from the U.S. Environmental Protection Agency’s (EPA) Enforcement and Compliance History Online database in July 2021 demonstrated that many permitted facilities in Maryland are operating under outdated permits. This review revealed a backlog of permits for MDE to consider and renew that were beyond their five-year permit term and were either administratively continued or expired. A permit is administratively continued when it stays in effect past its expiration date because MDE, through no fault of the permittee, is unable to issue a new permit in a timely fashion (in response to a permittee’s timely permit renewal application).[2] If the expiration date of a permit has passed and the permit has not been administratively continued (no timely submission of permit renewal application by permittee), then the permit is expired. 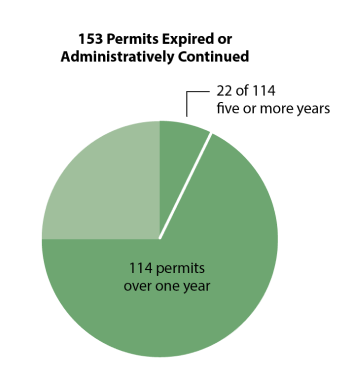 At the time of CAP’s data review, there were 153 permits that were either expired or administratively continued, and 114 that had been expired or administratively continued for over one year. Of those, 22 permits had been either expired or administratively continued for five or more years. For these egregiously delayed permits, an entire additional five-year permit term went by beyond the expiration date, without MDE analysis of the pollutants being discharged and the appropriateness of permit terms. After the period of significant delay, renewed permits may end up with more stringent terms than the prior permit. If MDE had not delayed in renewing these permits, some pollutant discharges to waterways from these facilities could have been prevented. These findings underscore the importance of MDE allocating adequate resources to permit renewals to avoid long periods of delay resulting in outdated permit terms. See August 9, 2021 Letter to MDE Re CAP Concerns Regarding Backlog of Administratively Continued and Expired Individual NPDES Permits for more information.

MDE’s 2020 Enforcement and Compliance Report reflects the state’s downward trend in clean water enforcement over the last two decades. This includes record lows in enforcement related to surface water dischargers and stormwater management, with 22 and four enforcement actions for each program, respectively.

In March 2020, in response to the COVID-19 outbreak, the EPA issued a dangerous (and now-rescinded) policy relaxing enforcement of environmental protections. The policy gave federally regulated facilities a free pass to not monitor or report pollution levels as required during the pandemic. It was akin to a police department announcing that they no longer would be issuing speeding tickets for traffic violations. Without monitoring, there is no way a facility can gauge whether it is polluting above its permit limits. And without fines, lawsuits, or penalties, companies have little incentive to abide by environmental laws.

While EPA’s policy was problematic for many reasons, it proved to be even more so when increased air pollution was linked to an increased risk of contracting COVID-19.

MDE responded to EPA’s policy stating it would only grant waivers of environmental requirements on a “careful and limited case-by-case basis.” However, when EPA’s enforcement discretion policy expired in August 2020, MDE still had not:

Finally, in September 2020, MDE updated its website to include a list of all the waiver requests it had received from regulated sites. It also added new language clarifying permittees’ obligations during the pandemic and listing a point of contact for compliance and enforcement inquiries.

In total, MDE received 71 requests from facilities to waive environmental laws, regulations, or permits for purposes allegedly related to the pandemic. Here is the breakdown:

A majority of the requests sent to MDE were related to the pandemic. But others, such as those seeking to delay important deadlines for construction projects, were not. Some of the entities requesting waivers had a track record of non-compliance before the pandemic. This suggests that some polluters may have used COVID-19 as an excuse to subvert or delay deadlines. These deadlines often work to prevent further air or water pollution. It also would not be unheard of if many entities failed to self-report violations to MDE at all.

The lack of Water & Science Administration enforcement and inspection activity creates a void that nonprofits have incredibly been forced to step into to hold violators accountable. In the past year, several high-profile examples have emerged where local environmental groups work with CAP members to spur MDE’s Water & Science Administration to take action against water polluters, either through litigation or other means.

The Magothy River Association and members within CAP’s team raised concerns with the Maryland Department of the Environment (MDE) about a 4.38-acre waste management and recycling facility in Pasadena, Maryland. This facility, owned by Ecology Services, was suspected to be operating without a pollution discharge permit, as required by the Clean Water Act. Beginning in January 2020, MDE inspected this facility eight times and found violations during every single visit before it finally filed a lawsuit against the facility in April 2021. In addition to the company operating illegally without permit coverage, MDE noted illegal sediment tracking, improperly stored vehicle parts, stains on the ground, and other unknown liquids and containers that were exposed to rainfall. While the filing of the lawsuit is independently a great win on the enforcement front, the state tolerated an endless number of stormwater violations prior to this and if it weren’t to watchdog groups, MDE may have never pursued further action against the facility.

The facility had been operating without its required coverage under the state's industrial stormwater permit for quite some time, despite discharging sediment and other unknown pollutants into the Magothy River. This runoff prevented yellow perch from spawning in nearby parts of the Magothy this year. The Magothy River is currently impaired by sediment, bacteria, ions, metals, nutrients, and PCBs.

Patapsco and Back River wastewater treatment plants in Baltimore

CAP’s team regularly researches and assesses enforcement data related to potential polluters in areas across Maryland. The Patapsco and Back River wastewater treatment plants (WWTPs) are the two largest facilities of their kind in the state, and CAP’s team has been tracking their compliance for some time. In the spring of 2021, the Baltimore Harbor Waterkeeper, who regularly conducts water quality monitoring in the local waterways around Baltimore City on behalf of Blue Water Baltimore, detected high levels of bacteria in the water near the Patapsco WWTP discharges point. At the same time, CAP member Chesapeake Legal Alliance noticed online reports of unusually high nitrogen levels at both WWTPs. 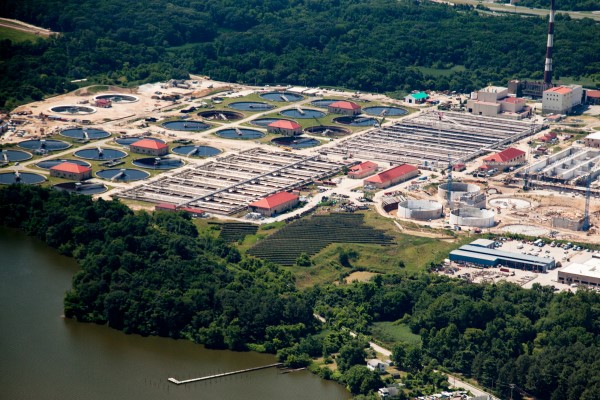 Chesapeake Legal Alliance coordinated with Blue Water Baltimore to alert MDE and ensure they were aware of the potential pollution violations.  MDE sent inspectors and determined significant staffing and operational failures were causing the plants to release far more pollutants into the Back River and Patapsco River than permitted. The amount of nitrogen pollution from these two plants is so significant it could single-handedly jeopardize Maryland’s ability to reach its Bay TMDL goals. In response, Chesapeake Legal Alliance filed suit on behalf of Blue Water Baltimore in federal court against Baltimore City for violations of the Clean Water Act at both WWTPs. Maryland later filed legal action against Baltimore City for the failures at the plants.

For years multiple environmental organizations have called on MDE to update the discharge permit for the Valley Proteins chicken rendering plant on Maryland’s Eastern Shore. The plant is the largest single source of nitrogen pollution in the Transquaking River and the plant has been operating on an outdated permit since 2006. This particular plant is in Linkwood, Maryland and uses chemical processes to render leftover chicken parts and bones for protein in animal feed.

Since its inception, CAP’s team has researched and assessed enforcement data related to this problematic facility. In April 2021, as a part of CAP’s work, Chesapeake Legal Alliance, representing ShoreRivers and Dorchester Citizens for Planned Growth, and Chesapeake Bay Foundation filed a notice of a potential lawsuit against Valley Proteins for its pollution violations. In just one quarter (July 2020 through September 2020), the rendering plant exceeded its ammonia pollution limits by 2,518 percent, according to EPA’s Enforcement & Compliance History Online.

In December 2021, ShoreRivers discovered what it believed to be pollution violations at the plant using a drone and reported it to MDE. Subsequent MDE inspections found significant violations at the plant and ordered it to be briefly shut down. The plant had been discharging sludge and inadequately treated wastewater into the river.

MDE filed a lawsuit against Valley Proteins in state court on February 2, shortly after the Chesapeake Legal Alliance, ShoreRivers, Dorchester Citizens for Planned Growth, and Chesapeake Bay Foundation filed their own lawsuit in federal court against Valley Proteins for violating their permit, with over 40 effluent violations over roughly two years, and exceeding pollution limits. In February, the above-named NGOs also filed a motion to intervene in MDE’s lawsuit. Without necessary changes at this rendering plant, the Transquaking River, the Chesapeake Bay, and the residents and ecosystems that rely upon them will continue to suffer.

[4] Because the available data did not indicate the type of noncompliance, we cannot assess the severity of the noncompliance, even where “noncompliance” was the specific condition of the site.