The Number of Enforcement Actions Taken by WSA

One of the most direct ways to measure MDE’s water-related enforcement levels is to look at the overall number of enforcement actions taken by MDE’s Water & Science Administration (WSA). There are a wide number of enforcement actions that WSA can take against a facility for significant and non-significant violations such as issuing stop-work orders, requiring corrective actions, obtaining injunctive relief, issuing penalties, referring pollution violations to the Attorney General for civil and criminal action, among others. Enforcement actions encourage polluters to stay in line with the requirements of the law.

The Number of Water-Related Inspections Conducted by WSA

The number of inspections conducted by WSA is a key indicator for how the department monitors compliance with important environmental protections. Inspections involve WSA staff visiting facilities or sites to assess whether a facility or site is in compliance with the law. WSA staff do so by collecting samples, taking photographs, interviewing employees, reviewing records and reports, and observing the overall operations or conditions.

The Number of Water-Related Penalties Collected by WSA

While the number of water-related penalties (adjusted for inflation, as measured by the Consumer Price Index) collected by WSA varies dramatically based on the nature, amount, and severity of violations resolved by various enforcement and legal actions against violators (much of which is outside of the control of WSA), this number gives some sense of the Department’s willingness to collect penalties from violators as a way to enforce environmental protections. 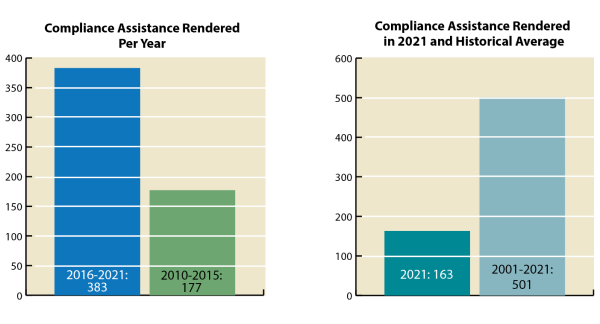 The MDE’s Capacity for Oversight and Enforcement

About: The Maryland Department of Environment’s capacity to enforce environmental laws and permits includes the number of active staff within the agency and the agency’s overall budget. 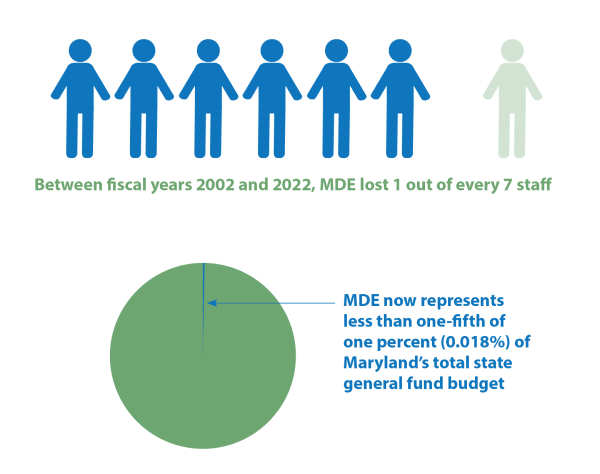